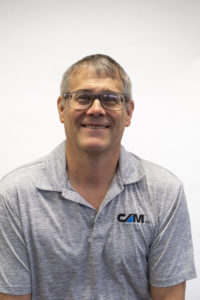 Gary Thewes has worked at CAM for 23 years as a Construction Manager. Some refer to him in the office as the “Get ‘Er Done Guy.” Gary works on construction jobs before, during, and after clients move in. He works on project designs, budgets, bidding proposals, scheduling, onsite coordination and more. He is available for clients after move-in for any other construction needs they have as well.

Gary was raised in a construction-oriented family. He learned the trades from his dad, an ironworker along with his brother, a carpenter and eventually enrolled in the Union Carpentry Program. He ended his apprenticeship at the Union Carpentry Program after four years, leaving as a Journeyman Carpenter. From there, he worked professionally as a carpenter and job foreman for Canton Floors Inc. for 10 years before taking his talents to CAM, Inc.

At CAM, Gary enjoys being part of a team that takes care of everyone they work with, which he believes is why clients and employees stick around for a long time. Gary often works with the same contractors over and over, delivering a quality experience each time. As Gary says, “working for a company that treats their employees, subcontractors, and customers well makes a difference.”

Many of the principles that drive Gary come from his traditional Boy Scout values. Gary is an Eagle Scout and a long-time Scout Leader, who can often be found participating in Scout programs such as going camping with the troop. Gary lives at home with his wife Vicki. He is the father of two children…his daughter Anna, who currently lives in Fairborn and son Joey, who is currently in high school and working towards becoming an Eagle Scout himself.

Back to About Page.

Fill out the form to get in touch.